Yamaha is one of the most prolific motorcycle makers in the world. The Japanese brand has created numerous legendary bikes that have ruled the roads for decades. Generally preferred for their massive power and aerodynamics on the sports bikes, Yamaha has also started to take control of the proceedings in the naked-biked segments. And their latest 250 cc Yamaha FZ 25 certainly packs a punch with its mind-blowing performance and stunning looks.

FZ 25 is based on the same platform as the XT250, which is one hell of a machine, as well. Though most of the people are going for the truly faired sports bike, Yamaha R15 v3, FZ 25 is for those who want a massive power with the comfort of a naked or tourer bike. The bike churns out a maximum of 20.9 bhp power, which is incredible, looking at the renowned performance of the Yamaha engines. The traction of the bike in adverse conditions is extremely good, and it gives decent value for money to the owner with amazing features.

With a reliable TCI ignition, it doesn’t cause trouble to the owner, even in tough conditions. Kerb weight of 148 kgs is extremely light for a 250 cc bike, which also gives it an edge over its companions in a drag race as well.  With 0-100 km in just 10.2 seconds, it certainly can take on some rivals like Apache 200 to or even an NS 200 ( initially). Though KTM naked bikes are more powerful than Yamaha FZ 25, but it certainly can maintain a shoulder to shoulder in start in a drag race. But the bike is not only meant for the performance and power of the engine, and this bike lives up to the expectations of daily commuters as well. With incredible mileage of  43 kmpl, it is amongst the most versatile bikes in the segment. 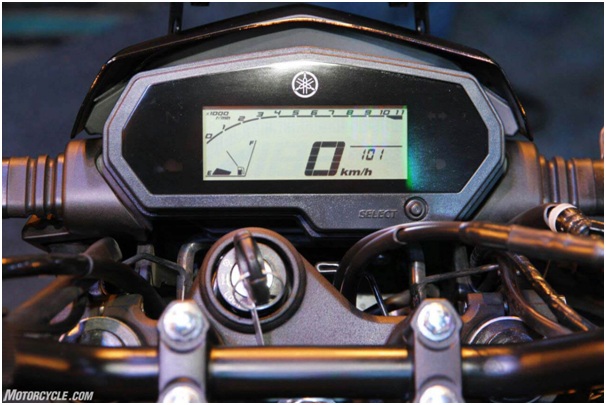 The bike looks quite sturdy and bold with a decent rider stance,  sporty MotoGP detailing of the fine lines on the side of the bike, and also an uplifted rear end of the bikes adds to the amazing design of the bike. The Bike seems to be decently refined upto 100 kmpl, but tends to show some vibrations in the engine when it comes to the top-end speeds. Thus, the owner of the bike might feel a bit let down in that phase as other bikes in this price range like RS 200 and duke 200 have fierce throttle response in the top end Speeds.

All in all, FZ 25 is a no-nonsense everyday commutable bike, which has the spark of the Yamaha genes in its performance and also the unparalleled credibility of the Japanese brand. It may lack in the higher end power, but it also is available in considerably lesser prices than the rivals. With an exclusive price of 1,34,180 and an on road price of 1,47,000 and that too for a 250 cc Yamaha bike, it is a decent bargain, and it should be your first choice if you are a daily commuter of more than 50 km.

When it comes to letting your teens drive a car, every parent gets a mini heart attack at the beginning. Jokes apart, but it is really a huge concern for the parents to leave their kids on the road with such huge responsibility. Still, they have to learn it, right? They must be responsible enough […]

Maintaining Your Car during the Winters

Your car has been your prized possession. You would have spent a fortune purchasing your car. You should rest assured that purchasing a car would not be an easy task in the present times. Despite numerous finance options made available online, you would be required to consider several other aspects as well. Therefore, now that […]

Why you should buy used instead of new

Buying used cars instead of new offers the average consumer many advantages. Overall, used cars can run just as well as a new car but without the sticker shock, expensive insurance, and higher rate of depreciation. Lower Starting Price: When you buy a used car, you can still get a great car but at the fraction […]

Money is that factor that is needed the most

Things should get acknowledged after Laser treatment Toronto

How to Enjoy Traveling and Save Money

What Happens When There’s a Gas Leak in the Home?

The 4 Amazing Benefits Of Paperboard Packaging